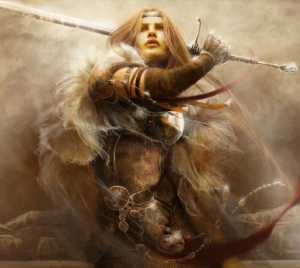 I know I’ve written extensively about the Shield Maidens of Avalon before, but I never really put together the entire mythos to go with their story. They are an integral part of the Forever Avalon series so they need to have as detailed a back story as the Arthurian legend.

They are a class of warriors unto themselves, without equal. Shield Maidens demonstrate that women should be treated as equals in all things. So, here goes …

The Shield Maidens of Avalon came to be after the dawn of the first age of Avalon. After the death of King Arthur at the Battle of Camlann, Merlin cast a spell that brought all things magical from the outside world to Avalon. This included many men and women touch by magic.

Queen Guinevere and Sir Percival—the last of the Knights of the Round Table—rallied the people together to start their new life on Avalon. As the people came together, Morgana le Fay saw this as an opportunity to gather her forces and destroy the last of the Pendragon’s so she may rule Avalon.

Percival was given the command by the Queen to reform the Knights of the Round Table to protect the people of Avalon. He knew their numbers were limited and no match for the forces of Morgana le Fay; but he saw a solution. There were many women amongst the people of Avalon—widows of knights lost in battle—who were capable fighters, trained by their husbands to protect themselves in time of need.

Percival took these women and paired them with knights, calling them Shield Maidens. Their charge was to fight alongside their knight as a team, forging a bond in battle. The two fought side-by-side, protecting each other and their fellow knights. The strategy worked and the forces of Morgana le Fay were driven back to the darkness from whence they came.

Their patrons saints are the three women revered by the order … Queen Guinevere, the Lady of the Lake and the Virgin Mary. They live by the same code of chivalry as the Knights of the Round Table:  To protect the weak and the defenseless; to keep faith and always speak the truth; to obey the laws of Avalon; to fight for the welfare of all and to guard the honour of the Knights of the Round Table.

Shield Maidens take a vow a chastity to demonstrate their fidelity to God and to their monarch. This gives the Shield Maiden’s a warrior heart. However, if a Shield Maiden should fall in love, they are permitted to leave the order in peace with the blessing of all.

These are the Shield Maidens of Avalon, fierce and battle-hardended, loyal and honour-driven. Their code of faith, charity, justice, truth, diligence, hope and valor are more than just words. For them, it is a way of life.