I am having a hard time deciding whether or not to use some more profane langauge in my stories. I’m a retired U.S. Navy Chief Petty Officer, so I am no stranger to swearing. But to be honest, I didn’t start using the “f-bomb” until I joined the Navy. Even when I started writing the Forever Avalon series, I didn’t include a lot of profanity in it (except for the occasional damn or Hell) because I wanted my kids to be able to read it.

But now, my kids are all grown up and I’m wondering if I should give a shit and let the old sailor out and pump up the volume. It seems more mainstream, but does it go against who I am as a writer? More importantly, does it help me tell my story?

I have found that, as I got older, I tolerate swearing even less. When my family gets together, I find myself reprimanding my kids when they swear, even though I’ve used those same words myself. I’m turning into my father as we speak… Never thought that would happen. But the strange thing is, I’m comfortable with it in my stories.

I don’t think it’s a matter of being mainstream, but rather is part of the story. I’m currently working through a new novel, The Last Magus. As this story developed, it was more graphic, in both language and sex. This isn’t a story about a family, like Forever Avalon, but a man coming into his own. It seemed the right thing to do, and it flowed naturally as I wrote it. I mean, what’s wrong with a goblin swearing like a New York gangster?

It may be something I don’t use as much as I use to, but profanity is a part of everyday life. I don’t want to distract from people reading my novels, but I also don’t want to change it if it doesn’t seem right.

When I’m writing dialogue, it has to flow as if the conversation is actually happening. A great example for me is The Sopranos TV series. Believe it or not, the producers made a video of every single swear word spoken in the series. It was 27 minutes of non-stop profanity. Yet, in his ow home, Tony didn’t tolerate that kind of language from his kids. I think that illustrates the kind of balance I’m looking for.

There has to be a balanced approach, not a constant stream of profanity-laden diatribe for the sake of being “out there” for all to see. Usually, profanity involves an emotional response or outburst. But, don’t use it for the sake of using it.

I like to think of war movies, past and present, as an example of that. I remember those old John Wayne movies where he would throw out the occasional damn or hell but nothing more. Move it up to today’s war movies where they swear worse than Tony Soprano. Is that accurate? Who can say, but like I said, the balance is between those two extremes.

Let’s not go full George Carlin “7 words you can’t say on television” on it unless that’s your target audience. Be true to you, and your story, just don’t fuck it up. 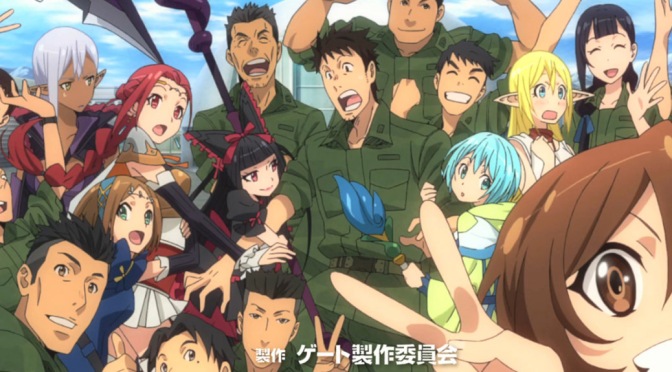 Never underestimate an anime series that brings all the right elements together to make it enjoyable, dramatic, and exciting to watch. Gate is such a series. I just finished “binge-watching” this series and it was a blast. It had all the fantasy elements a geek like me enjoys, mixed in with drama, political intrigue, and heart.

The full title is “Gate – Thus the JSDF fought there!” By the way, JSDF stands for the Japan Self-Defense Force, and (as a retired U.S. Navy veteran) I can see that this series was used as a promotional tool for the men and women who serve in the JSDF. It may be a fantasy anime series, but as far as the military is concerned, it demonstrated actual tactics that could be used in even the most outrageous situations. I mean, fighter jets squaring off against a fire dragon to measure its capabilities. Who’d a thought?

The synopsis of Gate is quite simple: “Off-duty Japan Self-Defense Forces (JSDF) officer and otaku, Youji Itami, is on his way to attend a doujin convention in Ginza, Tokyo, when a mysterious portal in the shape of a large gate suddenly appears. From this gate, supernatural creatures and warriors clad in medieval armor emerge, charging through the city, killing and destroying everything in their path. With swift actions, Youji saves as many lives as he can while the rest of the JSDF direct their efforts towards stopping the invasion. Three months after the attack, Youji has been tasked with leading a special recon team, as part of a JSDF task force, that will be sent to the world beyond the gate—now being referred to as the ‘Special Region.’ They must travel into this unknown world in order to learn more about what they are dealing with and attempt to befriend the locals in hopes of creating peaceful ties with the ruling empire. But if they fail, they face the consequence of participating in a devastating war that will engulf both sides of the gate.”

First off, let’s talk about the characters. Itami is the quintessential Japanese male, as he constantly admits that “he works to support his hobbies”… His hobbies being doujinshi (self-published magazines, manga, or novels). With all his quirks, he is a capable leader, smart and with the heart to match. I think that’s why the women of the “Special Region” fall for him. Rory Mercury is a 900-year-old demi-god acolyte of the God of War who gets aroused by battle. A “gothic loli” with incredible power is the most outrageous (and fun) character to watch. Lelei is a human sorceress that combines science from our world with the magic of her world as her “thesis” to become a master of magic. Her calm demeanor is an abstract to the others in this group. Tuka is an elf who lost her entire village to a fire dragon (her emotional breakthrough is a great part of the series). Her story is central, at times, though I think she was rather unused. Finally, Princess Pina Co Lada (yes, that’s her name) is the third princess of the human Empire who wants peace between Japan and the Empire. Also, she loves Japanese Yaoi manga as “art” she calls it.

There are also great characters within Itami’s own squad, all with their own quirks and personalities. I especially loved it when Kuribayashi (a tiny little woman) brutally beat up the crown prince after it was discovered he took Japanese as hostages and abused them. That was poetic justice.

There is a lot of political intrigue within this series, from other countries wanting in on the “Special Region” and the possibilities that exist there, to the political turmoil in Japan itself by sending the JSDF through the Gate. It was funny when a female politician tries to grill Rory as a “little girl” when in fact she was a 900-year old demi-god. It was terrifying when special forces from the U.S., Russia, and China tried to kidnap the girls during a trip to Japan and Rory, with her giant halberd, sliced right through them.

If you ever wondered what it would be like having modern troops invade a medieval fantasy world, look no further than Gate. I myself wrote this into my upcoming third novel in the Forever Avalon series, The Outlander War, but that was before I watched Gate. My interpretation was different from theirs, but Gate had a unique approach to this cross-connected world. They even went as far as to explain how the gate connected to not only our world, but others as well, leading to the variety of humans and demi-humans that inhabited the “Special Region”. And since the demi-humans range from cat girls to warrior rabbits and other creatures. It’s a menagerie of half-human/half-animal creature beyond the regular orcs, goblins, etc. The best part is watching the otaku (a young person who is obsessed with computers or particular aspects of popular culture to the detriment of their social skills) like Itami and others who fawn over these demi-humans as their fantasies come to life.

But what I really enjoyed in this series was the humanity. The JSDF went out of their way not to be “invaders” but rather they acted in self-defense of their country, their world, and the innocent people of the “Special Region” in the surrounding villages. They used their advanced medical skills and military technology to help the people and demonstrate that they weren’t there to hurt anyone. Itami’s squad was the focal point of this. They even went as far as to help the women of the capital “red light district” with their medical issues.

The villains in this series were equally repulsive and endearing. It was fun to watch them think themselves all-powerful only to be brought down by the JSDF. Here was an empire, similar I think to the might of the Roman Empire, a military machine as powerful as any in this world, attacking an enemy with all they had, only to be brought down in a hail of bullets. I enjoyed watching the crown prince squirm every time he heard a gunshot. It was glorious.

I hope that they make another season of Gate, although I read where the next part in the series (in the light novels) includes Alien-style Xenomorphs. That would be a little too strange, even for me. I read that a script for the next season is in the works, so hopefully one is coming, but let’s stick to the fantasy aspect of this story. There are still a lot of stories to tell with Itami and his “harem” of fantasy girls. that’s every otaku’s dream come true.

I saw this great meme on Instagram the other day. It said, “Other authors are not my competition! I stand with them, not against them!” Among the independent authors I have engaged with regularly on social media, that is absolutely true.

Believe it or not, we are a rather enlightened community. We give advice, like posts, share ideas and creative criticism to make us better writers. We might not be the most social bunch in public, which makes sense since most of us rarely see the light of day except for the soft glow of our laptop. But we are stronger together.

We all have the same problems… Writer’s block, manuscript editing (take 11), finding a publisher, getting reviews, book sales, etc. We share that common bond through our love of writing, and being a storyteller. And its through that bond that we reach out to one another for help, advice, and support.

I’ve edited manuscripts, swapped books for a review, promoted other authors books, all for free. Why? Because I know that someone will see what I’m doing and will maybe do the same for me. That’s what we do.

We all have the same goals and same aspirations. We want to achieve the same thing… Recognition for the thousands of hours of work, sleepless nights, and spending vacation money on marketing, publishing, and artwork.

Working together helps our community of independent authors grow, learn, and become a force to be reckoned with. We may not be signed up with a publisher, agent, or publicist, but we have each other. That’s what makes us unstoppable.

So let’s help each other out. If you need a book review, message me and we’ll do an exchange for reviews. I am here for my fellow authors.