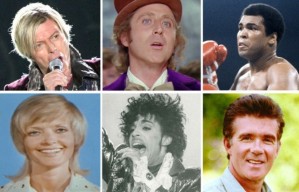 I can’t begin to tell you how happy I am that 2016 has come to an end. This has been, without a doubt, one of the worst years of my life and, speaking for the rest of the world for just a moment, a “sucktastic” year.

From the many deaths of legends and icons of music, television, and movies to an election that brought out the worst in our nation, this has not been a banner year. There are a few highlights scattered here and there, some bright spots along the way, but overall just a nasty year.

Let’s start out this year in review with the deaths of artists and actors. David Bowie, Glenn Fry, Prince and now George Michael gave us pause to reflect on the music of our youth. Our favorite TV mom, Florence Henderson passed, along with acting greats Gene Wilder, Alan Rickman, Alan Thicke and now Carrie Fisher a.k.a. Princess Leia. Muhammed Ali and John Glenn were American icons and Harper Lee, author of “To Kill a Mockingbird,” gave writers like me a moment to pause and reflect on the life of an amazing author. There are many more I could name, which demonstrates how bad this past year was.

There were some tragedies this year, mostly caused by ISIS-related terrorism. From the attacks in Paris to the Orlando murders, this was a year that brought the war on terrorism back to the forefront. We can only pray that the coming year will bring these evil attacks to an end.

Then there’s the election of 2016. Whether you’re a Democrat, Republican or Independent, this year’s political drama when into the dirt like driving down a back road in Alabama. The mud just kept getting deeper and deeper with every passing day. The only positive thing I can say is that maybe this change will do us some good, who knows. Some people are calling Trump the end of America, but then again they said the same thing about Obama and we’re still here. All I can say is let’s give it a chance before we condemn it outright.

On the bright side, this was a banner year for great movies and TV, especially for a geek like me. Game of Thrones, The Shannara Chronicles, all the CW superhero TV shows were incredible. Captain America: Civil War, Suicide Squad, Doctor Strange, Deadpool, Fantastic Beasts and Where to Find Them, and Rogue One: A Star Wars Story were just some of the blockbusters released this year. To quote President-elect Donald Trump, it was HUGE!

Lastly, I want to talk about my own personal experiences in 2016. The year started off bad for me as I lost my job with the Navy after more than 30 years of service, both active duty and as a civilian. I spent most of 2016 trying to find a new job, working as a substitute teacher to make ends meet. However, that did give me time to finish writing the third book in the Forever Avalon series, The Outlander War. I hope to get it published in 2017.

I can honest say this year ended with a glimmer of hope as I was offered a position as a writer-editor for the Department of Housing and Urban Development. I start in January and I am so looking forward to this new challenge. So let’s put 2016 in the rear view mirror and drive off into 2017, Here’s hoping for a great new year!

Merry Christmas! Happy Hannukah! Happy Kwanza! Happy Holidays! … Okay, now that that’s all out of the way, here’s the real reason for this week’s blog. I love to give gifts so I would love to give away five signed copies of my novel, The Dark Tides. This is my Christmas gift to you, but there is a slight catch.

I don’t want to give away my book to just anybody. I want to give it to real fans of the magical fantasy genre. So, I’ve devised a little contest. Below are five questions related to 80’s fantasy films, in my view one of the best decades for this genre. Answer the questions correctly in the comments section. The first five people who answer correctly will receive a signed copy of  The Dark Tides, just in time for Christmas.

All I ask in return is a review on Goodreads for me, to support a struggling independent author. So, without further adieu, here are your trivia questions:

Here’s a BONUS question. The first person to answer this correctly also gets a signed copy of my first novel, Forever Avalon. I hope you know your Saturday morning cartoons!

Name the six characters and their respective character classes from the Dungeons and Dragons (1983-1985) cartoon TV series.

Good luck to everyone out there. Please include an email with your answers so I can contact you to get a mailing address if you are a winner. Thanks for participating and, once again, Merry Christmahannukwanzadan! 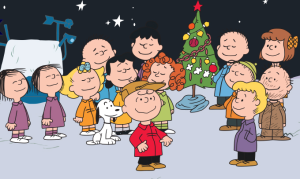 First and foremost, this post is not for those of you who are so politically correct in your life you won’t read “To Kill a Mockingbird” because of its colorful language, wave the American flag because it might offend somebody or say the Pledge of Allegiance because of the words “Under God.” I am not PC and never will be. We have lost our identity as Americans due to political correctness and I for one am sick of it.

But the most PC thing I hate is people not being allowed to say Merry Christmas. In every corporate press release over the past few years, everyone from Starbucks to Target said they will no longer say “Merry Christmas” to its patrons so as not to offend anyone. Why? What’s offensive about Merry Christmas?

It’s a cordial greeting between people to celebrate the festive time of year. It’s not a declaration of war, slang or a swear word. If I went into a Jewish Deli, ordered a pastrami on rye and the cashier said “Happy Hannukah” to me, I wouldn’t be offended or upset. The same with “Happy Kwanza” or “Merry Winster Solstice” either. These are terms of affection by people who want to be a little bit kinder and spread some good feelings of the holiday with it.

Every Christmas, you’ll find one more school that doesn’t allow Santa Claus to be seen anywhere in the classroom or allow candy canes to be passed out because of their religious basis. Have we become a society where we let every little thing offend us? It’s beyond ridiculous how people go out of their way not to be offensive with things that would never be considered offensive in normal society.

I don’t mean to get political here, but I hear from many of my liberal friends and family how we should emulate Europe more in education, social practices, etc. Really? In Europe, they have CHRISTMAS markets and CHRISTMAS displays with the Nativity and Santa EVERYWHERE without any worry of being sued. In Europe, schools sing CHRISTMAS carols and put on CHRISTMAS pageants, with the Three Wise Men and Baby Jesus.

As a writer, I love the old TV specials and cartoons about Christmas because they are so open and frank about the love, the joy and the spirit of the holiday with no apologies necessary. It’s why I love to write. I want to be as frank and open with my imagination within my novels. That’s why “A Charlie Brown Christmas” will never get old to me. Linus speech about the true meaning of Christmas is so touching and so powerful that it resonates with me even today.

So if someone says “Happy Holidays” to you as you pick up your Peppermint Mocha Latte, wish them a Merry Christmas. It’ll brighten your day and maybe theirs too. Merry Christmas!