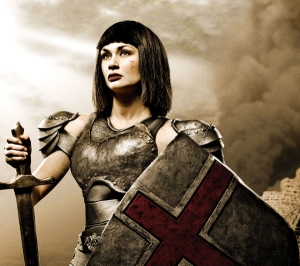 When I think of the word “Shield Maiden” I am reminded of where I first heard it used. In “The Lord of the Rings: The Two Towers” Aragorn calls Eowyn, a “Shield Maiden of Rohan.” It was from this that I created the Shield Maidens of Avalon, women devoted to God, King and Country, selfless in their duty of protecting the Knights of Avalon in battle. These warrior nuns (as I like to call them) are elite warriors on par with the Knights of the Round Table. The two share a special relationship, almost symbiotic,  that is built on honor, duty and trust. It’s one that the Gil-Gamesh and Sarafina, his adopted daughter, share; but theirs transcends that even more. Here is an excerpt from “The Dark Tides” that demonstrates how deep that relationship is. See if you can catch how I named my Shield Maidens.

Th e Crooked Goose was well known as an establishment that specifi cally catered to the lowlifes of Avalon. It sat at the crossroads of the Vanir Road and Hadrian’s Pass on the outskirts of Blackbriar Forest. Like many inns and taverns along the roads of Avalon, the Crooked
Goose was a place for travelers and locals to eat, drink, relax and conduct business. But anyone stopping there usually found themselves robbed blind or their throats cut come morning.

Th e inside of the Crooked Goose was dimly lit as most of the people visiting the establishment preferred the dark. Th e drinks were strong and intoxicating while the women were loose and homely. Humans, Dwarfs, Dark Elves and even some goblins and other dark creatures liked to meet in the Crooked Goose. Most of the time, they’re looking for any opportunities for underhanded work on Avalon, from simple robbery to an assassination.

Th e Gil-Gamesh lets this establishment stay open because he always knew where to look when trouble started or to fi nd information. Sarafina knew that too which is why the Crooked Goose was the first place she visited in her search for Lord MoonDrake. He’s been gone for nearly a week now. Th e fact that he hadn’t turned up dead yet meant they’re keeping him alive somewhere, probably torturing him.

Sarafina kicked the door in unceremoniously, blinding most of the patrons inside as the midday sun poured through the door. She was flanked by four of her sister Shield Maidens, dressed in plate armor and carrying various weapons from swords to pole arms. Sarafina walked in slowly, not saying a word until she found the right spot so she could see everyone in the room.

“Caleb Guoyle!” she shouted. “I want to know where that rat hides. Whoever tells me what I want to know will more than likely leave this place alive.”

“Now just one minute here!” a voice boomed from behind the bar. Elmer McElroy moved out from the bar, slowly shift ing his rather large frame. He’s been running the Crooked Goose for more than 50 years, since he killed the previous owner and took from him. He looked fat but
that was misleading. McElroy was strong as an ox and a resilient fighter. He once broke a trolls arm while arm wrestling with it. Elmer chomped down on his cigar and strutted over toward Sarafina. His receding hair line was more prominent with his hair pulled back into a ponytail. It also highlighted his enormous forehead, squinty eyes and bulbous nose.

“Just who do you think you are missy, coming into my establishment and threatening my customers,” he argued as he got right in Sarafina’s face. Elmer took a long drag on his cigar and blew the smoke right at her. “Now I suggest you get out of here before you end up like the
Gil-Gamesh!”

Sarafina turned away, as if to leave, but in one swift motion, she drew her sword and swung it at Elmer, cutting off the brute’s nose and half his cigar in one swipe. Elmer dropped to the floor, holding his face as blood spurted everywhere, agonizing in pain. He grabbed his apron and pulled it up to his nose to try to stem the bleeding.

Th e other Shield Maidens drew their weapons and surrounded Sarafina while she walked over to Elmer. Even though they were outnumbered, most of them knew better than to pick a fi ght with a Shield Maiden, especially one that’s extremely pissed off . Sarafina grabbed him by the collar and placed her sword at his throat as Elmer continued to scream at her.

“You’re going to lose something a lot more precious than that if you don’t answer my question,” she said as she shift ed her sword from his throat to his groin, cutting through his pants and poised right at his manhood.

“Easy, easy lass!” he protested. “I don’t know where Guoyle is. He moved into some keep hidden in the Fenris Mountains. That’s all I know, I swear!”

“You’re going to have to do better than that,” Sarafi na declared, cutting away a little more pants as her sword grazed his thigh.

“Wait! Wait!” he pleaded. “There’s a troll, Usage is his name, I think. He used to live in some old keep in the Fenris Mountains, or so he said. He’s living in an old stump of a wormwood tree near the western opening to Blackbriar. You can’t miss it.”

Sarafina pulled her sword out and let Elmer go. She stood up and stared down the others in the Crooked Goose. “Rest assured, if I have to come back here, no one will be leaving this place alive.”

Sarafina turned to leave with the other Shield Maidens right behind her. Th e sounds of horses could be heard as the maidens rode away from the Crooked Goose. As soon as they’re gone, the bar quickly emptied as patrons didn’t want to be around in case Elmer gave her some bad information. All Elmer could do was sit on the floor in excruciating pain, hoping he never saw that Shield Maiden again.

Th ey rode straight through as Sarafi na continued on her search for the Gil-Gamesh. “He wouldn’t give up on me, I won’t give up on him,” she pondered as she rode toward Blackbriar and the troll named Usage. Even though the sun was high in the sky, Blackbriar Forest lived up
to its name as the thick overgrowth kept the interior of the woods dark. Th e Shield Maidens slowly entered the forest until they spotted the fallen Wormwood tree just as Elmer described.

About 100 yards off the road sat the downed tree. It fell toward the path with the roots sticking up at the far end of the tree. On the other side of the roots, obscured from view, the soft glow of a fi re could be seen.

Sarafina and the Shield Maidens quickly dismounted to access the situation and determine the best course of action for them. “Okay, Merida … You and Ariel go around the right. Aurora and
Snow will come with me around the left . Move quickly and quietly so we can jump out at the same time.”

“Why do I always have to go with the princess?” Merida complained, her thick Brogue accent running her words together.

“Who’re you calling a princess, princess?” Ariel snapped back.

“Zip it you two or you’ll have more than an angry troll to deal with!” Sarafina retorted. The Shield Maidens drew their weapons and started moving toward the roots. Shield Maidens were well versed in all forms of combat but each carried a weapon unique to their personality and
skills. Merida knocked an arrow in her long bow while Ariel wielded a trident. Sarafi na and Aurora both drew long swords while Snow carried a large hammer with a pick-axe on the backside. They moved in unison until they reached the root of the fallen tree.