In the world of acting, there are many actors who could claim the title of “The Man” like Marlon Brando, John Wayne, Robert DeNiro, and Clint Eastwood to name a few. For me, that title will always rest in the hands of Charlton Heston. Here is a man who was not only lead actor in some of the greatest blockbusters in the history of cinema (Ben Hur and The Ten Commandments, just to mention a couple) but he was also President of the National Rifle Association. How cool is that?

He was an actor who played historic figures like Moses, John the Baptist, Marc Anthony, El Cid, President Andrew Jackson and Michelangelo. Though, to me, he will always be the actor that I loved from my favorite and classic post-apocalyptic science fiction movies. He brought name recognition to a genre of movies that, to some, seemed childish and beneath an actor of his caliber. I mean, how many actors are specifically known for, “Take your stinkin’ paws off me, you damn, dirty ape!” These were the movies of my childhood that I loved to watch and I aspired to create “tough as nails” characters,  like he often portrayed, as a writer. He even made the circus seem rough and tumble, and if you don’t believe, watch The Greatest Show on Earth and see for yourself.

His credits are too numerous, so I’m focusing on the three best movies of Charlton Heston that I always fall back too. I am talking about, are Planet of the Apes, The Omega Man, and Soylent Green. Although Hollywood has tried to redo these classics, they do not compare to the originals. He made these three movies in a six-year span, from 1968 to 1973, although I do have to include a fourth for his brief appearance in the 1970 sequel Beneath the Planet of the Apes.

Let’s start at the end and work our way back. In 1973, Heston starred in Soylent Green with Chuck Conners, Leigh Taylor-Young, and the great Edward G. Robinson. In the year 2022, the people of Earth survive on a ration known as Soylent Green. When an executive at the factory is murdered, Detective Robert Thorn (Heston) investigates the case. This leads to conspiracy, intrigue, and murder along with the shocking discovery that their rations are made from the dead. Like a lot of the other movies of its time, Soylent Green hit upon the fear of the era … overpopulation, starvation, nuclear war, etc. The film is loosely based upon the 1966 science fiction novel Make Room! Make Room! by Harry Harrison. It won the Nebula Award for Best Dramatic Presentation and the Saturn Award for Best Science Fiction Film in 1973. This was also Edward G. Robinson’s last movie so that makes it even better, but it’s Heston that drives this film. His performance turned, what could have been a boring movie, into an edge of your seat crime thriller.

In 1971, Charlton Heston starred in The Omega Man, based on the novel I am Legend by Richard Matheson. If that sounds familiar to you, it is the same name as the 2007 movie I am Legend starring Will Smith. There was also a 1964 adaptation called The Last Man on Earth starring Vincent Price. In any case, Heston’s version is, to me, the true representation of the novel. It’s about Dr. Robert Neville (Heston) the sole survivor of a plague that killed or turned most of the population into zombie-like creatures. His blood held the key to curing the victims and also vaccinating other survivors. This movie had many firsts, including the first interracial kiss between Heston and co-star Rosalind Cash as Lisa. Another great aspect of the film was the empty streets of Los Angeles. They filmed in downtown LA on a Sunday morning to show the post-apocalyptic, deserted streets. Though the movie only got a 55% rating on Rotten Tomatoes, it is considered a cult classic. Heston delivered one-liners better than Arnold Schwartzenegger. How he talks to himself, plays chess with a bust and haggled with an invisible car dealer are fun to watch. 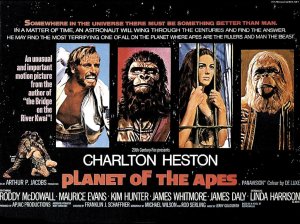 The last movie is the 1968 classic Planet of the Apes and it’s sequel, Beneath the Planet of the Apes. As astronaut George Taylor, Heston and his team’s space flight takes them more than 2000 years into the future where apes now rule and humans are mute slaves. Of course, you don’t find this out until the end of the movie when you see the classic image of the Statue of Liberty, rusted and torn apart on the shoreline. This movie hits on a big theme of that era, equality and racism, but this time, it’s the humans being discriminated against. The movie was the first for large-scale make-up effects for all the actors cast as apes. Heston shines in his role as the only talking human in a world of talking apes. His arrogance, vanity, and narcissism comes through in his tough-guy persona as he struggles to survive. He also has to share time with the late great Roddy McDowell, who starred in all five Planet of the Apes movies. In the end, though, this is one of Heston’s most memorable roles.

For a writer like me, you take inspiration wherever you can get it. I get mine from my childhood, spending my Saturday’s in the movie theater or watching it on UHF channels on my TV. These movies inspire us to look at the world differently and the possibilities that await us. I for one do not want to start eating Soylent Green anytime soon.