Ah, the joys of Christmas (in July) from the cosplayers all dressed in their finest costumes, the shrieking sounds of grown men as they find a rare comic for their collection, and the flashing lights of cameras as the stars take the stage. This is San Diego Comic-Con or Christmas for us nerds. It’s our time of year to bathe in the glory of everything comic book, sci-fi, and video game fantasy.

Part 2 of my review of this year’s big reveals at SDCC will focus on television, as the comic book genre has broadened its shoulders and spread its wings onto the small screen on multiple platforms. From Netflix to the CW, we have everything covered from mutant to magic to legends.

Starting off with Netflix, SDCC gave us a glimpse with trailers for Luke Cage, Iron First, Daredevil (Season 3) and The Defenders. With the exception of the first two, there wasn’t much to see. Daredevil and The Defenders were really just teasers for what’s to come. I did like hearing the voice of Stick (played by Scott Glenn) in the Defenders teaser, as he posed the question how these four (referring to Daredevil, Jessica Jones, Luke Cage and Iron Fist) “can save New York when they can’t even save themselves.” With Luke Cage, we get another hallway fight scene, except this time, it involves a man who has super strength and invulnerability. Iron Fist gave us just a glimpse of his origin story, not much else but just enough to make you want more. Overall, a good representation of the Marvel gritty, reality TV to satisfy our curiosity, for now. 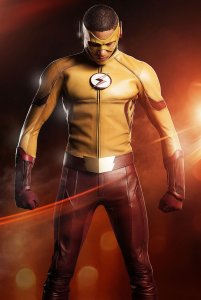 The CW is charting a course “full speed ahead” with The Flash, Arrow, Supergirl, and Legends of Tomorrow. The Flash is definitely moving in the “Flashpoint” storyline direction, with a lot of changes in Barry Allen’s new reality. We get to see Kid Flash in all his glory (great costume BTW) and, in the teaser, I saw a brief glimpse of the name and image of a classic Flash villain, Dr. Alchemy. It’s not exactly Flashpoint from the comics, but it seems to fit into the CW’s DC universe. Arrow is changing its tone a bit as Oliver tries to be mayor by day, vigilante by night. He gets help from a handful of new recruits in the form of Mister Terrific, Wilddog and Artemis. The villain for season 5 is Prometheus. He’s a big bad in the comics with tech that allowed him to mimic his enemies fighting style and use it against them, like Taskmaster in Marvel. His origin is different in CW as he was affected by Arrow’s initial killing spree in season one. We’ll see if these changes can bring them out of a dismal, and often criticized, season 4. There’s not much on Supergirl, though one rumor brings the Legionnaire Mon-el to National City and we’ll finally get to see her cousin, Superman, in real life. We’ll have to wait and see if they make an impact as part of the CW. Lastly, Legends of Tomorrow is putting together the Justice Society of America and facing off against the Legion of Doom. You can’t get any better than when Smallville brought the JSA to TV, so this will be interesting to see. Overall, CW has tried its best to keep their TV shows separate from the DC movie universe but still true to the comics. In my opinion, they’re doing a great job.

Besides Netflix and the cancellation of Agent Carter, Marvel’s only other show is  Agents of Shield on ABC. With the release of Doctor Strange in November, Agents of Shield are introducing magic to their combined movie/TV world. Ghost Rider will be the main antagonist for them, but not the Johnny Blaze Ghost Rider as portrayed in the movies by Nicolas Cage. This is the current comic book version of Robbie Reyes, played by Gabriel Luna. Instead of a motorcycle, Robbie drives a Dodge Charger with flaming wheels. There are a lot of great back story elements that will tie this version of the Ghost Rider into the current cast of Agents of Shield, including Inhuman Daisy’s evil dad, Calvin Zabo, a.k.a. Mr. Hyde. Marvel does it different from DC, keeping their movie and TV universes one and the same. It’s great because it plays off each other and sometimes brings their movie star power (Samuel L. Jackson and Jamie Alexander just to name a few) to the small screen.

There are a couple of other shows coming out this fall, like the new CBS Star Trek series Star Trek: Discovery, a comedy about an insurance agency specializing in superhero damages called Powerless on NBC, The Punisher getting his own Netflix series, X-Men comic book character Legion on Fox; and of course, season 7 of Game of Thrones. You are seeing a big change in television with the growing popularity of the superhero genre. It’s safe to say that we will see more series like this to come. It may be overused to some, but to geeks like me, it makes for great TV.