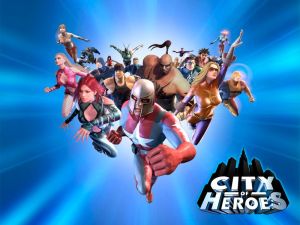 Happy Halloween everyone! This is a day when we all dress up as a favorite fantasy character. Mine has always been superheroes. That being said, I want to spend this Halloween talking about one of my favorite video games.I was a HUGE fan and player of the online game CITY OF HEROES. As a longtime comic book geek, this game was made for people like me. I could create original characters, design their costumes, their origins, everything. It was a sad day when Paragon City had to be shelved

I was a HUGE fan and player of the online game CITY OF HEROES. As a longtime comic book geek, this game was made for people like me. I could create original characters, design their costumes, their origins, everything. It was a sad day when Paragon City had to be shelved. I really miss logging in, traveling to City Hall, stand atop the statue of the fallen hero Atlas, stopping a couple of Hellions from intimidating old ladies or stop a bank robbery.

To celebrate this occasion, I wanted to share a short story I wrote revolving around one of the characters I created, Bone the Headhunter. I know, not the most original name, but with all the good names taken, it’s what I came up with. I hope you enjoy it, and once again, Happy Halloween!

The Last Goodbye: A City of Heroes short story

JOURNAL ENTRY – Sunday, March 30, 3:45 a.m.  – I’ve been waiting for three hours and still no sign of the Vahzilok. My contact assured me that they routinely take this route through Faultline, bringing fresh body parts to Dr. Vahzilok himself. Faultline has plenty of places to hide the bodies of their victims. It’s a ruined city trying desperately to rebuild itself. Hopefully, this will bring me closer to finding that monster and exacting my revenge.

He closed his journal and slide it into his armor. His grim demeanor was hidden beneath his mask – a faceless skull with eyes as black as night. He waited patiently, watching the construction site from the top of the steel structure. His cloaking device was working perfectly, bending light around him so as to avoid detection.

As he scanned the surroundings, his mind began to wander. They called him a hero, but Bone the Headhunter didn’t feel like one. All the technology he’d put into his armor and weapons may have made him stronger, but it didn’t fill the void inside him.

He wasn’t a hero when his wife and son were captured by the Vahzilok. Those demented zombies would have taken him too if it wasn’t for the armored hero Positron. He saved his life, but it was too late for his family. One of the Reapers slipped away during the fight, taking their bodies with him. They searched for days, but no sign of his wife and son. They were presumed dead… Another victim of the Vahzilok.

People called him driven… Possessed by an unforgiving rage and hatred for the Vahzilok. That may be, but tragedy usually does that to a man. At one time, he was Ted Johnson, an Olympic archery champion, and a successful businessman. Since the death of his family, he turned that talent into something more useful; he hunted down the villains of Paragon City. The gangs called him a headhunter, attacking without regard to his own personal safety, trying to bring down as many of them as possible.

Bone snapped back into reality when he heard a low groaning noise. He looked down and saw a couple of Abominations – giant animated cadavers – dragging two heavy body bags. These mindless zombies were doing the bidding of a Reaper and an Eidolon, one of Dr. Vahzilok’s “perfect” creations. They were heading toward the sewer grate, the route Bone’s informant told him about.

A touch on his glove deactivated his cloaking device. “No use wasting energy on the cloak in a face-to-face battle,” Bone surmised. He reached into his belt for his targeting drone, activating it and tossing it into the air. The drone buzzed around his head like an angry bee. Its laser sites helped him in many battles.

He drew his bow and nocked an explosive arrow in. “This should get their attention,” he said as Bone let his arrow fly. Before the Vahzilok could react, the arrow struck within their midst and exploded. The Vahzilok were sent flying to the ground.

Before they could react, Bone tossed a smoke grenade to blind their vision. He leaped down from the steel building, his hydraulic leg enhancements cushioned his landing. Once down, he knocked his next arrow.

Bone turned to face the Eidolon, drawing his next arrow. But before he could strike, black tendrils erupted from the ground and wrapped around Bone. He was frozen in place, unable to attack. The Eidolon wielded dark powers … A gift from Dr. Vahzilok for becoming his perfect creations.

He braced for the next attack from the Eidolon, but it didn’t come. The Eidolon was just standing there, staring at him. “What are you waiting for?” Bone shouted. The thought passed quickly as Bone prepared to take advantage of its lapse and attack.

“I was hoping this day would never come,” the Eidolon said to Bone. “Still, it had to happen sooner or later, didn’t it ‘Teddy.’” Bone was shocked to his senses. Only his wife called him Teddy. How did this Eidolon know his name?

“What kind of game are playing with me Eidolon?” Bone demanded. Before the Eidolon could answer, he broke free from the tendrils, raising his bow and aiming his arrow at the Eidolon. “How do you know that name?”

“Come now ‘Teddy,’ surely you can see past this mask as I easily as I can see past yours,” the Eidolon said mockingly. “Or maybe you’re just in denial.”

Bone slowly lowered his bow. He realized the truth in the Eidolon’s words, but he refused to believe it. “No, that’s not possible,” he said. The Eidolon peeled back the leather bindings that encased its body, removing its mask and exposing its face to Bone. Though bald, Bone recognized the eyes and lips – even the little mole on her cheek – of his wife.

“Val?” Bone asked. “Can it really be you?” The Eidolon smiled as if she enjoyed tormenting Bone.

“It’s me, Teddy, the wife you abandoned and left for dead.”

“I didn’t abandon you,” he explained, peeling his mask back to look at his wife, eye to eye. “I searched for you for days with Positron. We found no trace of you or Daniel.” Bone’s voice trailed off at the mention of his son’s name.

“Don’t you dare say his name,” the Eidolon screamed. “You have no right to speak his name. You have no idea what they did to him.”

“Yet here you are? Did you really become one of them?” Bone ripped back at her. “How could you do that? How could you join the Vahzilok?”

“I did what I had to survive,” she justified. “They were going to kill me, just like they did Daniel. So, I offered myself to them – to Dr. Vahzilok himself – to become one of his Eidolon. I did it to save my life.”

Bone couldn’t believe what he was hearing. She willingly gave herself to the Vahzilok, after what they did to their son.

“The Valerie I knew would never have done that. She would have died before joining these monsters,” Bone argued.

“What do you know about life and death,” she snapped back. “You have your precious medical transporters to protect you. I was on my own. I had a choice to make and I chose to live, no matter what I had to do.”

“You’re right about one thing,” she said as she pulled the mask back over her face. “Valerie Johnson is dead. I am Black Mary.”

Bone realized the truth in her words. “Then this is goodbye for the last time,” he told her as he put his mask back on. “But know this, Black Mary. The next time we meet, I won’t hesitate to kill you.”

Black Mary just stared at him. “Neither will I, Bone the Headhunter,” she said. “Neither will I.” Without hesitating, Bone pulled back his bow and fired a flaming arrow at the body bags, making the body parts unusable to the Vahzilok. Black Mary didn’t flinch. She just stared at Bone. He turned away and leaped into the air, heading toward the Faultline exit, back to Steel Canyon.

Suddenly, the sewer grate opened up and a group of Vahzilok stepped out. The Mortificator walked over to Black Mary. “Black Mary, what happened here?” he asked. She continued to stare off into the distance.

“We were ambushed by Bone the Headhunter,” she explained. “He destroyed the body bags, but I got him… I got him right through the heart.”

The Mortificator smiled, knowing that the Eidolon hurt that which the Vahzilok’s feared most. As they gathered up the remains of their fallen, they were too busy to see a tear rolling down Black Mary’s cheek. It was the last tear she will ever shed for her husband.

Across town, as Bone leaped through the air, he also shed a tear. He hasn’t cried since he lost his family the first time. He’ll never cry for them again.