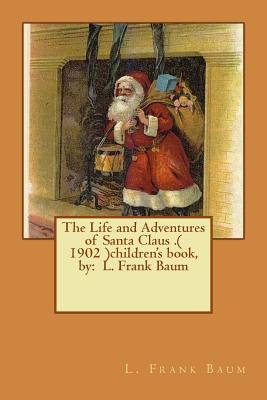 “Yet Burzee has its inhabitants—for all this. Nature peopled it in the beginning with Fairies, Knooks, Ryls and Nymphs. As long as the Forest stands it will be a home, a refuge and a playground to these sweet immortals, who revel undisturbed in its depths.”~L. Frank Baum, The Life and Adventures of Santa Claus

For all his literary works, L. Frank Baum is best known as the man behind all things Oz. And yet, one of his little k own works is the re-imagining of a classic… The life of Santa Claus! While the story of “old St. Nick” has been told, and retold, many different ways, none are as compelling or imaginative as Baum’s amazing storytelling.

I first came across this story as a young adult, but not the book, the classic Christmas special. In 1985, Rankin/Bass Productions (the makers of Rudolph the Red-Nosed Reindeer and other Christmas classics) created a new stop-motion animated special… The Life and Adventures of Santa Claus. It had colorful, whimsical characters I never saw before. It was magical. Like any modern, young adult, it was the television adaptation that led me to the original material.

L. Frank Baum’s The Life and Adventures of Santa Claus was first published in 1902, two years after his Wonderful Wizard of Oz. Drawing on the attributes of Santa Claus from Clement Moore’s 1822 poem “A Visit from St. Nicholas” (aka “Twas The Night Before Christmas”), Baum chronicles Santa’s life from his childhood in an enchanted forest—the same forest that is the source of all magic in the land of Oz—to his destiny of sharing gifts and spreading love to his fellow man. Along the way we witness him making his first toys, learn the origins of the Christmas tree and Christmas stockings, and discover the stories behind many Christmas secrets, like why Santa slides down chimneys, how he picks his reindeer, how he delivers all his toys in one night, and Santa Claus’ immortality.

This is a beautiful Christmas story, as well written and magical as the legend of Santa Claus. It has everything in it to spark a child’s imagination and scare a child into being a good boy or girl. If you love the Baum stories of Oz, you will love his take on Santa Claus. It’s amazing how a story that is over 100 years old is still relevant to children today. That’s what makes a great fantasy story, one that can be told over and over again and still resonate with people. It’s what I aspire to as a writer.

The best way to sum up this book is the most meaningful quote from the author.

“Every man has his mission, which is to leave the world better, in some way, than he found it.”~L. Frank Baum, Life and Adventures of Santa