There are plenty of inspirations when it comes to fantasy and science fiction. Most people have their favorites, i.e. Harry Potter, Lord of the Rings, Star Wars, etc. Me, I’m a little old school. My obsession with the fantasy and sci-fi genre began with movies many people today either haven’t seen, forgot or ignored. In any case, each one of these movies has a unique charm about them (for lack of a better term) making them a must-see for any fan or geek. These are my personal picks, so I would love to hear whether you agree or disagree. Either way, I hope you’ll take some “COVID19 down time” to watch some or all of these classics.

The Final Countdown (1980) — This is a kick-ass, “Red, White, & Blue” Hell-yah,  U-S-A, movie with a simple science fiction twist. The nuclear aircraft carrier USS Nimitz is sent back in time to days before the attack on Pearl Harbor in 1941. It has an all-star cast ( Kirk Douglas, Martin Sheen, James Farentino, Katharine Ross and Charles Durning) but the real star is the U.S. Navy. As a young man, looking to his future after high school, this movie made me want to sign up.  The filming from the flight deck to the sky above, seeing two F-14 Tomcats take on Japanese Zeroes, was epic. This is not your average science fiction movie, but the whole time travel aspect was so well done and wrapped up nicely at the end. 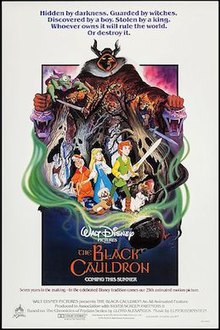 The Black Cauldron (1985) — This is a Disney film, but its one of the darkest Disney films they ever made. The plot is your basic boy becomes hero by defeating the evil sorcerer, your usual fantasy genre yarn, but the visuals of this film are stunning. Something I didn’t know was that it was loosely based on the first two books in The Chronicles of Prydain by Lloyd Alexander, a series of five novels that are, in turn, based on Welsh mythology. Set in the mythical land of Prydain during the Early Middle Ages, the film centers on the evil Horned King who hopes to secure an ancient magical cauldron that will aid him in his desire to conquer the world. He is opposed by a young pigherder named Taran, the princess Eilonwy, a bard and a wild creature named Gurgi who seek to destroy the cauldron. This was Disney’s 25th animated feature, the first animated film to receive a PG rating, and it doesn’t get the props like Disney’s other animated films because of the dark storyline. No matter what, this is a great fantasy movie to see.

Battle Beyond the Stars (1980) — In the age when every movie wanted to look like and have the success of Star Wars, this movie fits the bill to a “T” and then some. Staring Richard Thomas (John Boy from The Waltons TV series) and produced by the genius Roger Corman, this movie had every science fiction movie trope in it, including the kitchen sink. Corman intended this movie to be a remake of the classic The Magnificent Seven but set in outer space. It had a stellar cast, from the legendary John Saxon and George Peppard to Robert Vaughn, and the effects were as expected for 1980, pre-CGI. The story follows the expected plot… The farming world Akir is threatened by the tyrannical warlord Sador (Saxon). Sador’s huge dreadnaught has a “Stellar Converter”, a weapon that turns planets into small stars. He demands that the peaceful Akira submit to him or he will turn his Stellar Converter on their planet. They want to hire mercenaries to protect their world, but since Akir lacks valuable resources, its people can offer just food and shelter in payment. Shad (Thomas) volunteers for the recruiting mission. It is a strange movie, full of Corman’s classic sci-fi tropes,  including a Space Cowboy, half-dressed Valkyrie warrior, an elite assassin, and a reptilian slaver, but it is well laid out and fun to watch.

The Black Hole (1979) — Yet another Disney film that  has been relegated to the void that is the Disney vault due to its dark and violent nature. Another great cast ( Maximilian Schell, Robert Forster, Joseph Bottoms, Yvette Mimieux, Anthony Perkins and Ernest Borgnine) fills the screen with astounding visuals of a black hole in space, before Interstellar. The Palomino, nearing the end of its deep space mission, discovers a black hole in space with a large spaceship nearby, somehow defying the hole’s massive gravitational pull. The ship is identified as the long-lost USS Cygnus. Deciding to investigate, the Palomino encounters a mysterious null gravity field surrounding the Cygnus. What they find on board is far worse… Dr. Hans Reinhardt, a brilliant scientist, and what appears to be a crew of robots. They are not faceless drones, but are in fact the human crew who mutinied when Reinhardt refused to return to Earth and had been lobotomized and “reprogrammed” by Reinhardt to serve him and his floating murder-bot Maximilian. Again, a very dark movie for Disney that was not well received by critics but earned two Academy award nominations for cinematography and visual effects.

Dragonslayer (1981) — This movie is very familiar to anyone who played Dungeons and Dragons in the 80’s, but it is not seen as a top-rated movie like LOTR and others. It should be. Dragonslayer gave us our first look at a dragon, an honest to God dragon and all its power and glory. Before there was CGI, there was GoMotion, created by Industrial, Light and Magic for The Empire Strikes Back, Raiders of the Lost Ark and other classic movies of the 80s. In this movie, we got a dragon named Vermithrax that was everything you expected it to be… Evil, deadly, and downright terrifying. Another great cast (Peter MacNicol, Ralph Richardson, John Hallam and Caitlin Clarke) fills out this epic tale of a young apprentice taking on the beast to prove himself worthy as a sorcerer against a King who for years has placated the dragon with a virgin sacrifice. This is a worthy fantasy epic and a must see movie!

Deathstalker (1983) — The last movie on my list is another 80’s Roger Corman classic, filled with your favorite fantasy genre movie tropes just like he did in Battle Beyond the Stars. It’s a very Conan-esque movie, with buff men in leather, scantily-clad women, swords and sorcerers. It spawned four sequels, but this is the one to watch. Against, a basic storyline of sword-wielding mercenary on a quest to retrieve four magical items to stop a sorcerer from destroying his world. Along the way, he meets other warriors entering a tournament to find the greatest warrior and gain control over the kingdom. It’s not Shakespeare but it has all the qualities of a sword/sorcerer movie of the 80’s. It fits right in with The Beastmaster, Conan the Barbarian, and other fantasy movies of that time. Corman is a genius of the screen when it comes to movies like these.

So again, these are far from the Oscar-worthy movies you normally think of in the fantasy/sci-fi genre, but they have all the elements you think of when you watch these movies. I would love to hear about your favorites that I might have missed in my list, please comment and let me know.