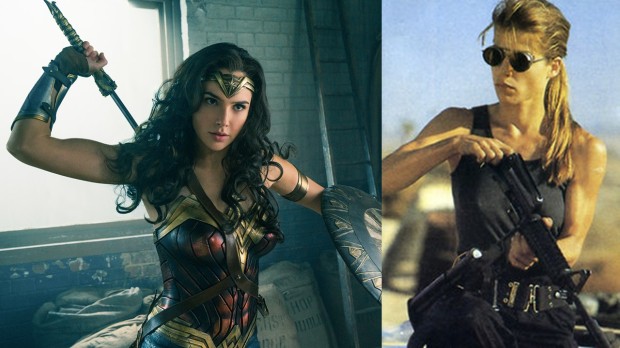 James Cameron is a moron! I had to start out with that because, in my opinion, he is. Here is an Academy award winning filmmaker, who has created some of the most powerful women on screen and he says something stupid like this:

“All of the self-congratulatory back-patting Hollywood’s been doing over Wonder Woman has been so misguided. She’s an objectified icon, and it’s just male Hollywood doing the same old thing!” he fumed. “I’m not saying I didn’t like the movie but, to me, it’s a step backwards. Sarah Connor was not a beauty icon. She was strong, she was troubled, she was a terrible mother, and she earned the respect of the audience through pure grit. And to me, [the benefit of characters like Sarah] is so obvious. I mean, half the audience is female!”

Seriously? You are pissing on one of the most powerful female icons in the history of fantasy by comparing her to your own character. Sorry, but as much as I love Sarah Connor, she is no Wonder Woman. This is a character that is idolized by millions in everything from comic books, action figures, anime, and cosplay. Her likeness is recognized by millions. If I were to hold up a picture of Wonder Woman and Sarah Conner, who do you think people are more likely to recognize?

If you’re trying to compare strong female icons of 80’s films, I’ll take Ripley over Sarah Conner any day. Even today, there are dozens of female characters I would chose over Sarah Conner, from Daenerys Targaryen to Harley Quinn to Lara Croft. Sarah Conner hasn’t been a bad ass since Terminator 2: Judgement Day.

Characters like Wonder Woman stand the test of time. She’s changed with the times, from a WWII patriotic heroine to a modern, free-thinking feminist in the 70’s to a woman of today, powerful in mind and body to stand up to the evils of our world. Wonder Woman has aged like a fine wine… bold, distinct and full-bodied (okay, sorry, bad pun).

Sarah Connor is a part of the modern, sci-fi genre, and rightly so, but you can’t compare her to Wonder Woman. There is no comparison. I think his comments are insulting to Gal Gadot, Patty Jenkins, Lynda Carter, and the thousands of fans who have been waiting to see her on the big screen. It is also insulting to Kate Winslet, Zoe Saldana, Mary Elizabeth Mastrantonio, Linda Hamilton, and every other strong woman who appeared in a James Cameron film.

I’ve tried to include strong, female characters in all my stories. It’s because I’ve had many strong women in my life. That’s what having a great female role model does. I think James Cameron needs one in his life.

2 thoughts on “Women should be feared, loved and respected”