I can honestly say that I love classic sci-fi/horror movies. I grew up watching them on Saturday afternoons on TV or late at night as part of the “Doctor Demento” movie showcase. I really consider them an essential part of my development as a sci-fi/fantasy writer. Their stories may be a little campy, and somewhat dated, but oh so fun to watch.

I think everyone has their own opinion on their favorite movies, I have a few that, to me are essential for any sci-fi/horror fan to watch. Some of these have been remade and update with modern movie magic, but the originals are still the best. 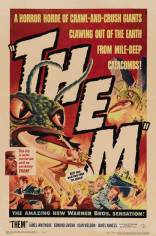 Them (1954) — The earliest atomic tests in New Mexico cause common ants to mutate into giant man-eating monsters that threaten civilization. This movie has an all-star cast, including James Whitmore and Edmund Gwenn (Santa Claus from Miracle on 34th Street). In the early days of the atomic bomb, scientists didn’t really know how radiation would affect people, insects, animals, etc. It wasn’t the giant ants that were scary in this movie, but the sound they made. When you heard that sound, it made chills run down your spine, kind of like the music from Friday the 13th when Jason Voorhees was near. The best scene was when they were talking to the little girl who survived the attack and, when she hears the sound of the ants, and shouts out “Them! Them!” It really makes the movie seem real and terrifying. 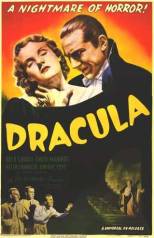 Dracula (1931) — The ancient vampire Count Dracula arrives in England and begins to prey upon the virtuous young Mina. Before vampires became sparkly boy-toys, there was Count Dracula. Bela Lugosi is, and always will be, the one and only Dracula. This is the role that, unfortunately, typecast him so that he rarely did any other roles outside the famous vampire; but at the same time, it is a role he will always be remembered for. He doesn’t bare the classic fangs we see in vampires today, but he was terrifying none the least. It is amazing to see the huge sets and dark, scary places associated with the classic story. Though it’s been told and retold, time and time again, this is still the original and the best one there is. 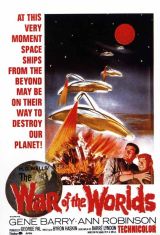 War of the Worlds (1953) — A small town in California is attacked by Martians, beginning a worldwide invasion. Though Orson Wells radio show started the hysteria around this adaptation of the H.G. Wells novel, the movie brought it to life. It even won an Academy Award for visual effects, influencing countless science fiction movies in the years to come. The death and destruction reigned down on the people of Earth was overwhelming. It also showed the ugly side of man, as they tear each other apart to escape the horror. Even in the end, when they died from something simple as bacteria, it demonstrated that we (human beings) are not the most powerful beings in the universe. This movie is always on the top of my watch list. 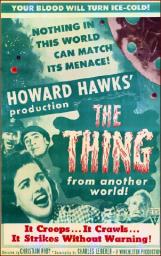 The Thing from Another World (1951) — Scientists and American Air Force officials fend off a bloodthirsty alien organism while at a remote arctic outpost. Many think John’s Carpenters The Thing is the best version of this story, but I beg to differ. This is, without a doubt, the best and the scariest there is. When battling aliens, it’s hard to imagine a fight like this:  A crashed spaceship, a frozen alien pilot, alien plant-life that grows on human blood, and more. The creature itself was terrifying to watch. His bloodthirsty nature was an integral part of the story, as was the idiot scientist who thought he could control it. Battling the creature in the freezing arctic made it even more difficult. This is an essential science fiction classic for everyone to see, but my advice is don’t watch it alone. 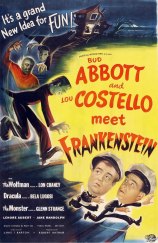 Abbott and Costello Meet Frankenstein (1948) — Two hapless freight handlers find themselves encountering Dracula, the Frankenstein monster and the Wolfman. Okay, it’s not a scary movie, but it’s too damn funny to ignore. Abbott and Costello ran into various classic movie monsters in a series of movies, but this one is the best. This movie has the original Dracula (Bela Lugosi), the original Wolfman (Lon Chaney, Jr.) and even a cameo by Vincent Price as the Invisible Man. It has so many great scenes that combined scary and funny. When Lou Costello was reading the description of Dracula and the coffin lid kept opening and closing, or when he goes into the Wolfman’s room and he keeps missing the monster’s attacks are side-splitting laughter to watch. This is a don’t miss movie.

There are a few honorable mentions like Night of the Living Dead (1968), The Time Machine (1960), The Wolfman (1941), Creature from the Black Lagoon (1954) and Godzilla (1954). I’m sure there are a few I missed, so please add your favorites to the comments. Just pop the popcorn, turn off the lights, and put in the dvd. Just remember to watch it with a friend.