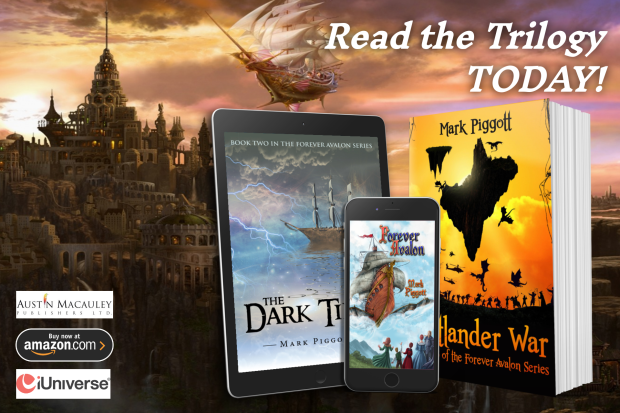 It has been a banner week for myself, for The Outlander War, and the Forever Avalon series in general. I will admit that, as a writer, I love it when people read my books and just get excited about reading it. It’s not about the accolades and awards, but rather the affirmation that I’m doing something that people enjoy. It’s what makes being an author so “kick ass” if you know what I mean. And this past week has been no exception.

I received my first review of the third novel in the Forever Avalon series, The Outlander War, from one of its editors. Michael Stettes is a writer-editor like me, whom I work with in my day job in Washington, D.C. About two years ago, I asked him for his help in editing The Outlander War. To do that, he first asked to read my first two books and then he edited my third before I sent it off to the publisher. Mike was a big help to me and his honesty about my writing and storytelling made me understand the writing process, my often “wordiness” in sentences, and plot holes that I needed to avoid. He recently posted an honest review about The Outlander War.

“The Outlander War is a clever, action-fueled tale of ancient Arthurian magic vs. the modern military, conjured in striking detail through the expertise of veteran Mark Piggott. Every page of this magic vs. machine epic is packed with brilliant details, clever characters, and powerful, heartfelt heroism.”

Those words mean a lot to me. I love hearing from my fans, but coming from someone I consider a peer is a real honor. Thanks Mike!

Lastly, I had the great honor to be interviewed by another peer, author Robert B. Hayek. RB Hayek has been writing for over a decade. A graduate of Cal State Fullerton, Hayek authored two books and a writing credit on two web series. He has written freelance for several websites and also has worked for several prominent companies including Fox Sports and CBS Sports. He invited me to participate in an author interview.

“Piggott went the writer’s route and that enabled him to expand his imagination, and his horizons on the possibilities to what he might do. One of the principal themes in his stories is mixing folklore with fantasy.”

You can check out Robert and his website, providing various services to authors, by clicking here and check out my interview here.

UPDATE: Right after its release, Robert’s interview with yours truly was feature in the online literary magazine, S.H. Literary Times Daily. Congratulations Robert and thanks for the awesome exposure for Forever Avalon!

So, as always, I’d like to put a plug here about helping out those independent authors. Reviews are the life-blood of any authors but it means the most to those of us trying to get by with a big-name publisher or literary agent under our belts. Please, if you read a book, LEAVE A REVIEW. Good or bad, I want to know how I’m doing, just be honest. Thanks again for all your support!